Orange You Glad You Know The Truth About Carrots? 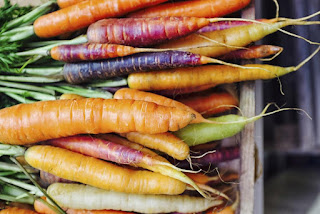 Americans love carrots and tend to believe they have great nutritional value.
Well, there is good genetic evidence that wild carrot is the direct progenitor of the cultivated carrot. Selection for a swollen rooted type suitable for domestic consumption undoubtedly took many centuries.

The Carrot has a somewhat obscure history, surrounded by doubt an enigma and it is difficult to pin down when domestication took place. The wide distribution of Wild Carrot, the absence of carrot root remains in archaeological excavations and lack of documentary evidence does not enable us to determine precisely where and when carrot domestication was initiated.

Over thousands of years, it moved from being a small, tough, bitter and spindly root to a fleshy, sweet, pigmented unbranched edible root. Even before the introduction of domesticated carrots, wild plants were grown in gardens as medicinal plants.

When the carrot is grown in favorable conditions the roots of successive generations enlarge quickly. So the evolution of cultivars with enlarged roots can easily be explained, but what has puzzled historians is why it took so long for the modern cultivated, edible carrot to appear. The clue is that, although evidence of wild carrot seeds have been found in pre-historic cave dwellings and Greek and Roman records they were only used in medicinal applications and not for the consumption of the root, as a food. 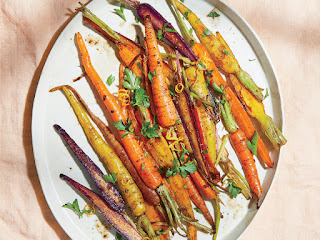 Very early evidence of the consumption of carrots (seeds) has also been
found in prehistoric Swiss lake
dwellings (Brothwell and Brothwell, 1969). It is said that the cultivated and edible carrot dates back about 5,000 years ago when the purple root was found to be growing in the area now known as Afghanistan. Temple drawings from Egypt in 2000 BC show a purple plant, which some Egyptologists believe to be a purple carrot. Egyptian papyruses containing information about treatments with seeds were found in pharaoh crypts, but there is no direct carrot reference. The Carrot Museum has visited several tomb paintings in the Valleys of Luxor and some images are compelling. It is known that ancient Egyptians did use other members of the Apiaceae family (carrot) including anise, celery, and coriander. None of these plants would have been used as root crops but were rather leaf, petiole or seed crops.. Several books on the subject make a conjecture about this but there is never proper documentary evidence that the Egyptians grew or ate carrots.

Many colorful varieties were later found in Asia and there is also evidence of their use in Greece during the Hellenistic period. However, it is not known whether or not the Egyptians or Greeks cultivated a very edible plant or if they only grew wild carrots for their seeds. Mostly they were used medicinally. It likewise found a place as a medicinal plant in the gardens of ancient Rome, where it was used as an aphrodisiac and in some cases as part of a concoction to prevent poisoning.  Mithridates VI, King of Pontius (120bc-63bc) had a recipe including Cretan carrots seeds, which actually worked!
Carrots were said to be recognized as one of the plants in the garden of the Egyptian king Merodach-Baladan in the eighth century B.C, once again there is no documentary evidence for this although many plants shown on the clay tablets held in the British Museum remain to be identified.


The carrot was mentioned by Greek and Latin writers by various names, but it was Galen (circa second century A.D.) who called it Daucus to distinguish the Carrot from the Parsnip.  Carrot and parsnip have often been confused in historical references and in many cases were interchangeable, as those early carrots which were "dirty white" were very similar (in looks at least) to parsnip.  They are of course from the same family. In classical and medieval writings both vegetables seem to have been sometimes called pastinaca yet each vegetable appears to be well under cultivation in Roman times. Since in many cases only the written word exists, if the Medieval writer called the plants "pastinaca", it is difficult to know if they were referring to carrots or parsnips.

Throughout the Classical Period and the Middle Ages writers constantly confused carrots and parsnips. This may seem odd given that the average carrot is about six inches long and bright orange while a parsnip is off white and can grow 3 feet, but this distinction was much less obvious before early modern plant breeders got to work. The orange carrot is a product of the 16th and 17th centuries probably in the Low Countries. Its original color varied between dirty white and pinkish purple. Both vegetables have also got much fatter and fleshier in recent centuries, and parsnips may have been bred to be longer as well. In other words, early medieval carrots and parsnips were both thin and woody and mostly of a vaguely whitish color. This being the case, almost everyone up to the early modern period can perhaps be forgiven for failing to distinguish between the two, however frustrating this may be for the food or agriculture historian.

The purple carrot existed in Central Asia for several centuries before it was brought west by the Arabs in about the 10th century.
Modern research has shown that there are two distinct groups of cultivated carrots from which the modern orange carrot derives, these are distinguished by their root colors and features of the leaves and flowers.

Eastern/Asiatic carrot (anthocyanin) - identified by its purple and/or yellow branched root, grey-green leaves which are poorly dissected and an early flowering habit; they often have a habit to bolt easily. The greatest diversity of these carrots is found in Afghanistan, Russia, Iran, and India. These are possible centers of domestication, which took place around the 10th century.
Eastern carrot was probably spread by Moorish invaders via Northern Africa to Spain in the 12th century. It is considered that the purple carrot was brought westward as far as the Arab countries from Afghanistan (where the purple carrots of antiquity are still grown).
Anthocyanin carrots are still under cultivation in Asia but are being rapidly replaced by orange rooted Western carrots.

Western or carotene carrot - identified by its yellow, orange, white or red unbranched root and yellowish green leaves more clearly dissected and slightly hairy. It is likely these carrots derived from the Eastern group by selection among hybrid progenies of yellow Eastern carrots, white carrots and wild subspecies grown in the Mediterranean.  The first two originated by mutation.
It is thought that Western carrots may have originated later in Asia Minor, around Turkey and could have formed from a mutant which removed the anthocyanin (purple color).

The name Carota for the garden Carrot is found first in the Roman writings of Athenaeus in 200 A.D., and in a book on cookery by Apicius Czclius in 230 A.D.
After the fall of Rome, a period often referred to as the Dark Ages, carrots stopped being widely seen (or at least recorded) in Europe until the Arabs reintroduced them to Europe in the Middle Ages around 1100. Scribes continued to reproduce and embellish previous manuscripts, rather than observing and representing the existing contemporary native plants.
The third book of Dioscorides the Greek – Roots -  sets out an account of roots, juices, herbs, and seeds — suitable both for common use and for medications. 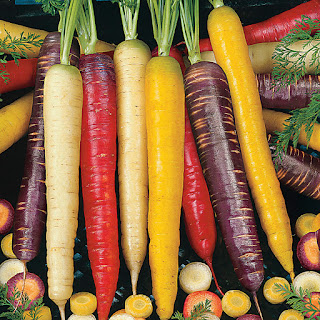 Orange carrots derived from yellow forms, and then from human selection and development, probably in the Netherlands. It is now proved through modern genetic study that humans made selections from a gene pool involving yellow rooted eastern carrots.

Some scholars think that orange carrots did not to appear until the 16th century, although there is a Byzantine manuscript of 512 ad, and an 11th century illuminated script, both of which depict an orange rooted carrot, and suggesting it was around long before.

The purple carrots being consumed at the same time, not only stained cookware and appeared quite unsightly, they did not taste as good as orange carrots, and so the orange rooted varieties came to dominate the culinary world.

The cheap and accessible orange root was constantly popular as a staple food throughout Victorian times and became even more so during the two World Wars when other food sources became scarce.

Research and development continues to take place to produce disease resistant varieties, together with research into other uses for the root such a bio fuel and its use in construction as an alternative to fibre glass and carbon fibre.

The current yellow/orange varieties (containing carotene) through gradual selection in Europe, now form the basis of the commercial cultivars around the world, mainly through their superior taste, versatility, nutritional value and cultural acceptance.

There is a lot more detail of the history of carrots through the ages, and the next pages in the Carrot Museum go on to give the full history from pre-historic seeds through to how the Greeks and Romans used carrots, first in medicine and then food.

There is a more detailed analysis of the available evidence surrounding its origins, cultivation and domestication, and journey across Europe, also exploring the emergence of the ubiquitous orange carrot, here.   The main colours of carrots now have their own pages  -  purple - black - white - yellow


Follow its steps through the dark ages and then enlightenment with 17th-century herbalists who recommended carrots and their seeds for a wide variety of ailments.   Finally, after many years as a low-class vegetable, mainly used for animal fodder,  it came of age during the food scarcity of the two World Wars when people were forced to be more inventive with fewer resources. Check Out The Carrot Museum

It is a long and fascinating story.